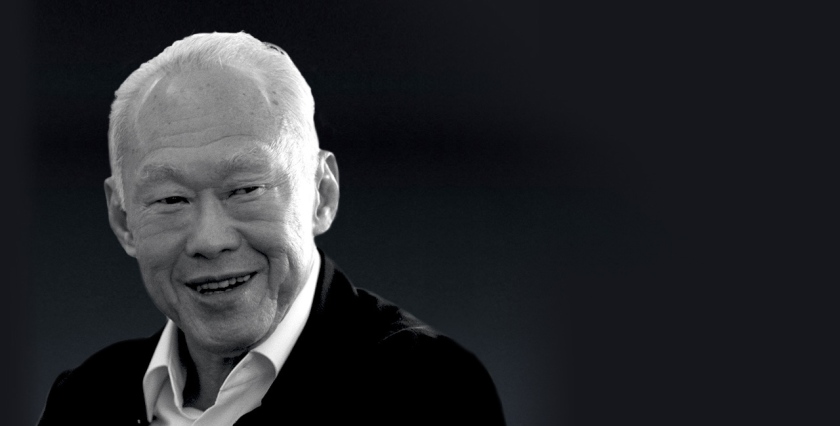 // Photo from The Straits Times

I find Singaporeans really superficial at times, and the passing of Mr Lee Kuan Yew just furthers my observation and opinion.

Maybe it’s the way we had been brought up, or maybe that’s how society has been like for awhile, but it seems as though there is this obligation to be self-righteous and follow the popular opinion on this small little island. It’s as if we’re born with a knee-jerk reaction of hatred when one expresses his stand on a certain matter, a stand that is unpopular, or one that isn’t deemed politically correct.

Mr Lee Kuan Yew was a remarkable man, one who is astute, forward-thinking, and at times, snobbish and obnoxious. He propelled Singapore into first world glory (or second world, given our current long list of social issues), made it into one of the greatest miracles in the modern day, and even made the Central Intelligence Agency pissed their pants. Articles and social media postings on his contributions, together with testimonials on his character, have been so fervent that it has become mildly irritating to chance upon them now. Yes, we get it. He’s a great man, and his efforts to build this slum from the ground up should be recognised and immortalised in the history books. He’s a visionary, he’s a genius, and for that, I respect him. I truly do.

But does that mean I have a moral imperative to feel sad at his passing?

When it comes to the people who considerably impacted on the world, their actions and resulting consequences seem to be peripheral when judging their characters. I’ve had no prior interactions with him, but what about those people whose lives Mr Lee Kuan Yew had destroyed due to ideological differences? Those people who got arrested, who got bankrupted, who got exiled because they stood up for their beliefs, no matter how unpopular they were? Should they be grateful? Should they bask in his achievements and be thankful? Should they appreciate his actions that even the almighty Amnesty International have criticised?

It’s incomprehensible to me how Singaporeans aren’t ready to accept a diverse range of opinions that may not necessarily stroke their self-centred ego and thinking. A period set aside for mourning has instead turned into a social event of sorts, where people try to one up each other to see who thought up the most heartfelt dedication. The instant gratification they receive from their friends prove to be unsatisfactory though, as the vile chastisement of those who dare confront Mr Lee’s questionable ethics soon begins. Their passion and hunger could be put to better use on simple corroboration though, as one would find that he didn’t really transform Singapore from a fishing village into a financial global hub that it is today. It was already a bustling port for quite sometime before Singapore gained independence, but who exactly is this Sir Stamford Raffles anyway?

Lee Kuan Yew set the foundation which allowed Singapore to flourish as a nation, but he was undoubtedly a controversial chap. Indeed he was. It is no secret the levels he stooped to in his pursuit of political domination and deep, personal vendettas. A huge amount of people who chose to forgo the benefit of hindsight lambasted his policies and questioned his actions that were deemed unnecessary by the majority (how ironic). And he wasn’t sorry. He said so himself, that he had no regrets. So why aren’t his victims, or people who don’t agree with him, allowed to exercise their basic human instincts and feel anger? Or relief? Or even happiness?

I myself find it hard to feel sad for Mr Lee. Like I mentioned earlier, I respect him. But on what grounds am I supposed to feel sad for his passing? The previous generations have plenty to be thankful for, that’s understandable, but I was born into his legacy, into something he helped created. So why should I feel sad that I’m a privileged person living in a modern-day miracle he created? Sadness doesn’t determine if someone is indeed appreciative. Respect automatically does; appreciation forms the core of its definition. And more often than not, respect is enough. Anything beyond that is overtly pretentious.

To sum it up, there’s no denying the man was a remarkable person who made this country what it is today. For those who benefitted from his wit and sagacity, good for you. But there’s also no denying he made a handful of controversial decisions that affected his people, some positively, some negatively. We are all humans and as such, making mistakes become inevitable. While you grief and honor the brilliance of our first Prime Minister, show an equal amount of sensitivity to those who didn’t find it in themselves to forgive his vicious actions.

Deep down, you can disagree with their opinions, but allow them to be human, just like the man you admire so much, Mr Lee Kuan Yew.

May you rest in peace, Sir.

For those who want to find out more about Mr Lee Kuan Yew, do visit http://leekuanyew.straitstimes.com, where you can find a beautifully designed yet comprehensive and in-depth timeline of his life and contributions to Singapore.

There was an error retrieving images from Instagram. An attempt will be remade in a few minutes.