Before the new school term began, I went on a mini-outing with my campmates Jess, Wei Ting, and Cheryl to take a rare breather before the start of a stressful new term. Ironically, as it turned out, the second term is so much less hectic than the first.

Anyway, they decided to go cafe-hopping, which I later found out that the hopping tour consists of only one stop.

I needed to practice my color grading across a wide range of styles, so I decided to tag along and shoot some footage along the way. Here was our trip in about 4 mins, with some pretty calm music, depending on taste.

The following pictures of the trip are basically screengrabs of the video (because it didn’t once occur to me at all to actually use my DSLR for its primary purpose).

Necessary Provisions was conveniently located right in the middle of absolutely nowhere. We got stranded for about half an hour because of the cafe’s dislike for mainstream civilisation. As you can see from the video, we rode a bus from Clementi Interchange, went into a foresty area that reminds me of the start of horror movies, alighted, went up a couple of hills that serves only to remind Singaporeans how wide our wealth inequality is, and then past a supposed residential building which convinces me I’m in a horror movie, before reaching our destination. 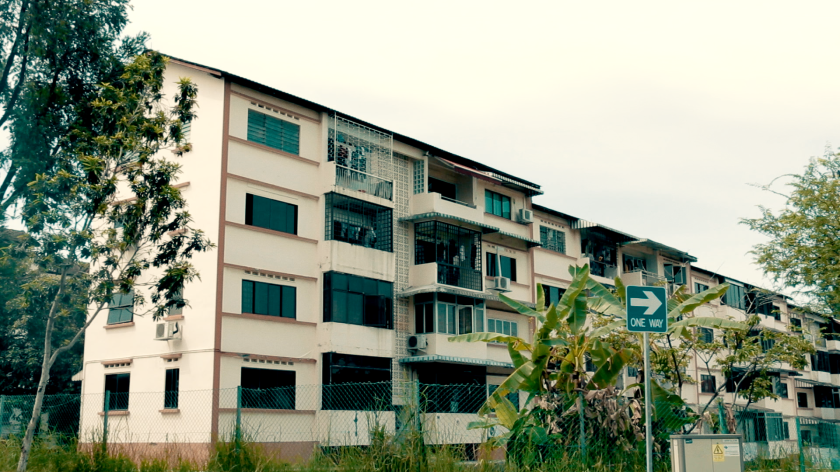 I must admit though, Necessary Provisions, from the outside, looked nothing like the cafes Singapore’s hipster-cafe fever have given birth to in recent years. Just a simple, minimalistic-looking coffeeplace for the adults to catchup.

True enough, there were no signs of any teenage-looking people when we entered. But, for such an obscured location, it was packed to the brim. The cafe itself isn’t big at all, with almost two quarters of it being used as a kitchen and another quarter as display areas for cakes, muffins etc., leaving just slightly above one quarter of the space for patrons to sit. This was starting to feel like some sort of rebel camp in those zombie/apocalyptic movies.

We went in the afternoon, so only the breakfast menu was available to us. We took quite awhile to order, unsurprising considering how the food items were not exactly meant to be eaten at an awkward timing in the afternoon.

The drinks arrived first, and I was pleasantly surprised when my Iced Espresso in Milk ($6.50) came in a unusual combination of two ‘shots’ of milk and several Espresso ice cubes. It took some time before it actually tasted like what I thought it’ll taste like, and the ‘portion’ of it was actually pretty small for me, but the unique experience and presentation was worth the $6.50 alone. Wei Ting and I then got a Banana Nutela Panini ($5), which turned out to be a rather odd combination. The stark contrast in flavor was definitely new, but undoubtedly weird as well. It was really fulling too, which was not what I was expecting.

The scones ($5), which Jess bought, was a little dry and salty to my liking.

The interior design of the place was phenomenal, which you can see for yourself up close in the video, and the atmosphere and ambience was definitely right if you’re the type of person who likes reading books while listening to the sound of chattering being accompanied by the clinging of glass cups and mugs. For me personally though, it was way too noisy and cramped for me. I prefer large, empty spaces with the only human beings present making minimal noise. As mentioned above, the noteworthy presentation of their items, the remarkable sights inside, and quite the reasonable pricing do contribute to an overall delightful experience, but it’s not a cafe I’ll stay in for long, or visit anytime soon as a matter of fact.

Definitely worth a visit though. After failing to decide on our next destination due to our temporary abstinence from the general population, we ended up taking two buses and walked a great deal to the Grandstand, initially to try out a burger place. Then, we stumbled into a farmers’ market all the way at the end of the mall walkway.

PasarBella is hands down the most amazing ‘shopping place’ I’ve seen and been to, the second being the amazing Star Vista, and Marina Bay Sands. When I first entered the place, I was so cluster-shocked because it looked so much like the place outside Max’s Homemade Cupcakes (the proper shop) in Two Broke Girls.

It just doesn’t look, and feel like Singapore. I genuinely felt like I was in New York.

We walked around for a li’ll while, and the place sure as hell was full of hipster-looking items and food. I thought the emphasis here was a little too heavy on looks because the showroom-esque and perfect appearance of everything kinda took away the essence of what was actually for sale. I couldn’t really see past, or be legitimately interested in any of the shops’ goods behind the over-brilliant designing of the each and every shop.

The girls bought some food from a pizza place and we crashed on the upper deck, which featured a beautiful view of the market as a whole. Cheryl got herself a Carbonara pasta that costs $8 for a tiny portion, but the savory and milky taste made the exorbitant spending in “Singapore’s upscale Manhattan” worth it. Jess got herself something that was supposedly ‘really healthy’, and while it does an admirable effort of preventing a heart attack, it failed to stop my taste buds from spiralling into deep, deep, depression. It was six in the evening, so we started to make our way out, and that was when we saw a lot of fresh produce and fruits for sale, and chanced on the eyebrow-raising Rooms of Ease, which were actually the restrooms. I’ll just be frank. Every Singaporean needs to come here. It’s not even a matter of choice anymore. It should be an obligation. The place here is absolutely gorgeous and seductive, and the next time I’m back I will probably visit store to store to take a closer look and maybe try a few cuisines or two while I’m at it. The atmosphere was marvellous, and the people here were generally well-mannered, fun-spirited and actually waited for me to finish shooting before moving past my camera (this is so rare in Singapore nowadays as unbelievable as it sounds). Maybe I’m just overreacting, but it just didn’t occur to me that there is a place in Singapore that looked like it came straight out of the United States. Do you guys have any cafes or places to recommend? Let me know in the comments section below!

At the end of every month, I’ll be sending out a specially designed email to all my subscribers. Besides containing all of my latest posts and happenings, I’ll also share and feature content from around the web, including humor and jokes, local bands and artists, and personally curated articles that discuss a variety of topics among many other things!
<br>
<br>
<i><b>Let me know your email <br>address below!</i></b>