I’ve always maintained the view that political correctness, not terrorism, is the one that’s eventually going to kill us all.

Society automatically labels anyone who dares raise their valid concerns about Islam as “Islamophobes”. Anyone who dares criticise this supposedly perfect religion is deemed a bigot and racist (ironic considering Islam isn’t a race in any sense). Even Muslims or ex-Muslims who does not take the “ISIS isn’t Muslim” stance are met with calls of betrayal, disloyalty, and pandering.

And this has led to a worrying number of (potentially productive) dialogues and discussions being halted in the name of political correctness – people’s feelings are too easily bruised these days. “How dare you say ISIS are Muslims! Can’t you see they attacked Muslims during the month of Ramadan! ISIS has nothing to do with Islam you Trump-supporting pig!” they’ll scream.

And so, cue the ad hominem ‘backlash’, we become content. We become satisfied with adopting “if you dare link Muslims with terrorism, you’re a (insert insult)” as the official narrative for the whole ISIS situation. True enough, as the terror group tear through Paris, Brussels, Orlando, Dhaka and Lahore etc. over the past few months, people have been quick to denounce the link between the terrorists and Islam.

But is it really our fault, the fault of the general, non-Muslim public, that we link ISIS and Islam to terrorism? These monsters scream “Allahu Akbar” before they detonate themselves. They cheer and worship Allah before tossing blindfolded people off the top of buildings. They quote passages from the Quran before chopping their heads off and cite verses from it to justify raping women and torturing children. In short, they use their religion to justify their barbaric actions. Is it us, the non-Muslim public, making the link/connection, or should the blame be deservedly shifted to these group of vile human low-lives?

Or think of how most Muslims are perpetuating the notion that Islam is a problematic religion without realising it. It is not a secret that the Quran contains verses that are extremely questionable – some advocate for killing of non-believers, others propose beheading them. Yet, whenever these points are brought up, Muslims would usually reply with an “oh, those are Allah’s words. You must have misquoted them, or maybe the real meaning got lost in translation.”

What kind of message is this sending out to non-Muslims out there? By constantly proposing alternative interpretations instead of confronting the verses (and insisting their own interpretations are the only valid ones), Muslims are essentially telling us that hey, something is wrong with the book. Or more specifically, one that insinuates the person who wrote the holy book is utterly incompetent. Think about it, this is Allah we’re talking about. Allah is considered a divine being. If what he had written is supposedly perfect and cannot possibly be wrong, why do you have to keep explaining to others that he is being misunderstood? Or being misquoted? If someone neutral has to listen to you, an average joe, and your persistent explanations, over what Allah, someone who’s divine, wrote himself, it doesn’t exactly inspire confidence, does it?

To quote Pakistani writer Ali A. Rizvi, who’s a Muslim himself, 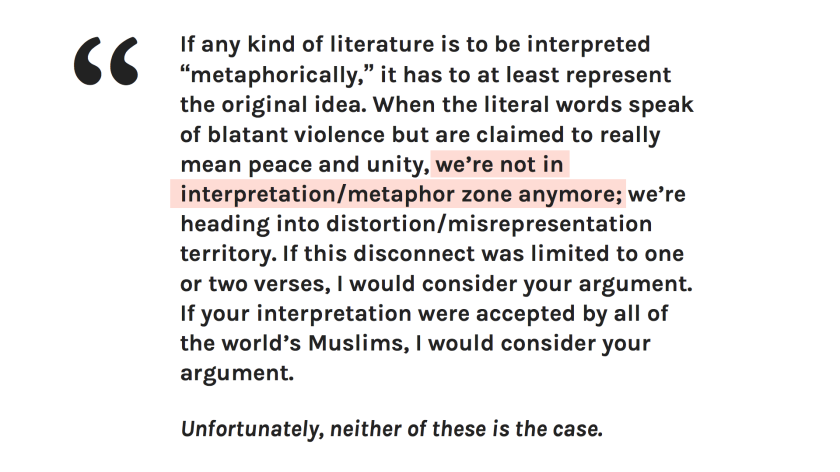 If it’s of any help, here’s a summarised representation of the above paragraphs:

You walk into a restaurant, the waiter brings you to your table and gives you a menu. You see an appetiser called “Fresh Oysters”. You call the waiter over and tell him, How is the rest of the world supposed to feel when they see Muslims defending the very same book that these Islamic radicals quote to justify their despicable behaviors? And to insist that it’s perfect, that any verses even remotely hinting at violence are automatically taken out of context, I honestly don’t blame people for detesting Islam because of ISIS. There’s only so many things we can blame on our governments.

“You condemn all kinds of terrible things being done in the name of your religion, but when the same things appear as verses in your book, you use all your faculties to defend them.” – Ali A. Rizvi

I’ll be the first to admit that this isn’t fair to most Muslims, to those who practice their religion peacefully, and to those who wish for nothing but harmony and prosperity on our planet. But here lies the inconvenient truth: this isn’t something you can put it down purely on the hate or “ignorance” of people.

ISIS is a Muslim organisation, and contrary to popular belief, isn’t one that exists because the people in it are stupid (entirely). Those who support Hillary Clinton aren’t necessarily hedge fund managers or slimy Wall Street bankers; those who support Trump aren’t entirely jobless rednecks or racist Southerners. ISIS exists in a spectrum – yes, the core is made up of brainwashed, angsty and betrayed folks filled with hatred, but its membership extends to highly-educated professionals and decorated businessmen. These people pray to Allah and read the Quran like every Muslim would, but somehow, somewhere, they’ve been tricked into believing that ISIS are the good guys.

But as Maajid Nawaz, columnist and ex-advisor to David Cameron, puts it so succinctly,

The problem will not go away until Muslims can acknowledge that, no matter how uncomfortable it is.

I’m hardly a politically correct person by my own admission, but amidst everything I just wrote, it’s getting more and more painful to see these tragic headlines appearing on my newsfeeds everyday. For all the talk about media desensitisation, every episode of the war against terror still hurts. Innocent people and their hurting families, devastated in an instant by the senseless acts of fellow human beings. Victims that could have very well been us.

Will things change anytime soon? I sincerely hope so.

Not a fat chance.

This is a deep-rooted issue with no end in sight, and one which resolution involves something wholly complex and intricate, and I’m not going to pretend I have all the answers while comfortably sitting behind the relative safety of my computer screen.

All I know is this:

Don’t say that ISIS aren’t “true Muslims” in the wake of a disaster. No matter how many times we light up landmarks with flags, overlay our profile pictures with those same flags, create hashtags to display our support and give speeches about strength, unity, and tolerance, things will never change this way.

For Muslims aren’t just part of the complicated solution;

They are the solution.

If you enjoyed this article, you might be interested in some of my other Unpopular Opinions, such as my latest one, No, You’re Not Beautiful.

Every once in awhile, I’ll be sending out a specially curated email to all my subscribers. Besides containing all of my latest posts and happenings, I’ll also share and feature content from around the web, including humor and jokes, local bands and artists, and personally handpicked articles that discuss a variety of topics among many other things!